With Dempsey now retired from professional boxing, a new era was born and the next challenger to Tunney’s title would be New Zealand’s Tom Heeney.  He was called the “Hard Rock from Down Under,” having won the New Zealand heavyweight championship in 1920 and the Australian heavyweight championship in 1922.  After fighting in England and South Africa in 1924, he came to the United States and fought his way through the heavyweight division.  The Tunney-Heeney fight was set to take place on July 26, 1928 at Yankee Stadium in New York City.  By this time, Tunney had established residence in Speculator.  He could vote there and considered making it his permanent home.  He returned to Speculator for three months of training, accompanied by three dozen books to assist in his pre-fight preparations.   Fight promoter Tex Rickard set up a full publicity staff at both Osborne Hotel and at Heeney’s training camp in New Jersey to help promote the event.   Having beaten the once perceived immortal Jack Dempsey not once, but twice, Tunney was now even more popular.  This meant an even larger following of fight fans converging upon Speculator.  Daily crowds of more than 5,000 spectators now came to watch his training and over the July 4th weekend that summer, it was estimated that 25,000 fight fans were in town to get a glimpse of the world champion.  Many of the fans coming to watch the training included both males and females and the very affluent from New York City.  The single phone in the lobby of Osborne Hotel usually had a New York City business man on it yelling, “buy & sell orders” back to the New York Stock Exchange floor in Manhattan.

Sticking to his normal training regimen of road work, bag work, sparring, Adirondack hikes and reading, Tunney once again enjoyed the serene settings of Lake Pleasant and the support that everyone in and around Speculator provided him.  He enjoyed it so much, that he decided to stay in Speculator right up until the morning of the fight, announcing that he would fly to New York City that same day.  Tunney did this to cut down the travel time from Speculator to New York from 7 hours by car and train, to 2 hours by plane.  This also provided him one last night of sound sleep in the congenial surroundings of the Adirondacks.  This was not viewed as favorable to the fight promoters, who wanted to be sure that Tunney was in New York City in a safe and timely manner ahead of the match.  Tunney slept in at “the Shack” and arose on the morning of the fight at 7am, ate breakfast, and then boarded a dual-motored Sikorsky Amphibian airplane that had touched down on Lake Pleasant the previous afternoon.  The entire village turned out to greet him and see him off, as he left for the 150 mile trip to New York City.  An insurance policy was taken out to insure Tunney’s life for $300,000 and the plane for $30,000 for the two-hour trip and the premium cost $1,000.  In addition to Tunney and the pilot, a mechanic and New York Tribune sportswriter William O’Connell McGeehan also rode along.  He stuck his hand out the window to wave to the crowd as the plane took off at 10:12am.  Once in the air, Tunney then pointed out Adirondack landmarks to the reporter, before taking a nap.  A second plane followed with additional members of the press who were going to cover the fight.  It was initially planned for them to fly over Amsterdam to wave to all of his well-wishers, but weather conditions cancelled that plan and they flew a more northerly route towards Albany, and then followed the Hudson River down to New York City.  Two hours and thirteen minutes later the plane touched down at 12:25pm on the Hudson River (called the North River then) at around 90th Street.  This was the same waterfront area where his father made his career and where the younger Tunney supported the early part of his fighting career.  It was also the same body of water in which he swam with his friends as a young boy and snuck away to read in privacy.  The plane then taxied up to 54th street where the entourage off-loaded into a limousine which drove him to Madison Square Garden for the 2pm weigh-in, in the neighborhood where he grew up.  Along the way, they passed the vehicle that was bringing Heeney to the weigh-ins and they waved to each other.  He then enjoyed a mid-afternoon dinner, a quick nap, and then went to Yankee Stadium for the fight.  The fight, scheduled for 15 rounds, took place that evening at the original Yankee Stadium in front of 45,000 fans.  Tunney was in great form and easily fended off the challenger.  The fight was stopped by the referee in the 11th round because Heeney was severally bruised and bleeding. Fewer than 12 hours after having left Speculator, Tunney had protected his title with a technical knock-out, and received $525,000 as his share of the purse for the fight.

Feeling he had nothing left to prove in the ring and that he was now financially secure, On August 1st, just six days after the Heeney fight, Tunney announced that he was retiring from boxing.  This marked the first time a Heavyweight champion had retired while he was champion.  From 1915 to 1928, Tunney had competed in 78 professional fights, winning 77 of them.  He also became the first Heavyweight champion to have never been knocked out or had a fight stopped.  One week later on August 8th, it was also announced that he was engaged to Mary “Polly” Lauder, a socialite who was the granddaughter of George Lauder, who was a first cousin and business partner of Andrew Carnegie.  The boxing world was in shock and newspaper headlines stated that he was retiring to study Philosophy in Rome.  The couple soon left for Europe to allow Tunney some time to rest and to pursue their interests in the arts.  And on October 3, 1928 they were married in a private ceremony in Rome Italy.

Upon returning from Europe, the couple resided in Stamford, Connecticut where they raised a family that included three boys:  Gene Jr., Jonathon “Jay”, and John, and a daughter Joan.  In retirement from boxing, Gene utilized his connections and sharp acumen to pursue a successful career in the business world in the United States and Canada. He was an executive of banks, manufacturing concerns, insurance companies and a newspaper.  He also served as a board member on more than a dozen corporations.  In addition, he was often called upon to speak at public functions and would also lend his name as chairman to dozens of worthy causes.

In 1932 he wrote his first book called “A Man Must Fight” which talked about his boxing career.  He followed that up with an autobiography of his life titled “Arms for Living” in 1941.  He also kept an interest in the military for many years to come, serving in the Marine Reserves as a Reserve Officer.  After being asked by Secretary of the Navy, James Forrestal, to help efforts to mobilize ahead of World War II, he enlisted in the U.S. Navy in 1940.  With the rank of Lieutenant Commander, he was appointed to head up the Navy physical fitness program.  He served in Washington and eventually on land and on ships in the Americas and the Pacific Theater throughout World War II.  He was discharged after the war as a full captain, having earned two citations.

Many boxing experts felt that Tunney left the sport while still in his prime.  And if he had fought a few more times, he may have gone down in the record books as the greatest heavyweight of all-time.  In staying away from the ring, he became the first heavyweight champion to retire from ring, and stay retired.  While Tunney left boxing at the young age of 31, doing so allowed him to leave the sport with no ill-health effects, and be able to pursue his life-long interests in studying the arts, science, music and literature.  His notoriety also allowed him to engage and become lifelong acquaintances of the literary greats such as George Bernard Shaw and Ernest Hemingway.  And throughout his life, he continued to stay in touch with Bill Osborne.  According to William Osborne Jr., “I have lots of letters that Tunney wrote my father after he retired.  The letters were on stationary from hotels around the world.  He was always on publicity tours and doing personal appearances and the letters talked about what Tunney had been doing, where he had been, and the people he was meeting.  When my grandfather died in 1966, Tunney was out of the country and unable to attend.  He did however, send flowers and wrote a nice hand-written letter to the family telling us what my grandfather and our family meant to him and his career.”

Numerous books have been written that document the legacy of Tunney’s career and life,  most notably was in 2010, when his son, Jay, authored a book titled “The Prizefighter and the Playwright Gene Tunney and Bernard Shaw.”  The book documents the unique friendship between Tunney and the world-famous playwright George Bernard Show.  More information about the book can be found at www.tunney-shaw.org .

While it has been over 90 years since Tunney last fought, his mark on the small Adirondack village of Speculator can still be felt.  His popularity while training in newly founded Speculator attracted both local boxing fans and many of New York’s pollical and financial elite.  As these affluent guests spent time in Speculator and became aware of the beauty of the area, many were inspired to purchase camps and property of their own there.  The descendants of many of those people still own the properties there today.  Tunney’s time there also put the young village of Speculator “on the worldwide map.”  Just four years prior, the small community had incorporated and changed its name to Speculator in an effort to become more known and draw tourism.  As the thousands of stories written about Tunney’s time in Speculator went out in newspapers and publications around the world, each story started with “Speculator” and the date.  This gave exposure to the remote Adirondack village to millions of readers throughout all parts of the world.  Tunney’s success in the ring utilizing the solace of Lake Pleasant and the Osborne resort also served to pave the way for many other professional boxers who would also come to Speculator to train for future historically important heavyweight championship fights in the 1930’s.  Those fighters included Max Schmeling and Max Baer, whose times training in Speculator will be the subject of future stories.  The Osborne Resort went out of business in 1963, and its buildings were razed in 1969.  The land where the initial “Shack” that Tunney stayed in is now owned by the Camp of the Woods organization.  And the site where one of the Osborne Hotels and the original boxing ring once stood is an empty field just south of the Route 30 Bridge that crosses over the Kunjamuck River outlet, between Route 30 and the lake.  On August 26, 2014 Tunney Park was dedicated on the site.  A large crowd gathered for the ceremony, including Jay Tunney, the son of Gene and Polly Lauder Tunney.  A plaque that outlines Tunney’s career and history in Speculator was unveiled.  A stone featuring the image of Tunney etched on it was also dedicated and is on display in the park today.  Numerous photos and artifacts documenting Tunney’s time training in Speculator can also be seen by visiting the Historical Society Museum of Lake Pleasant & Speculator, located on Route 8 in Speculator.

Mike Hauser is the Director of Retail Sales for Aqua Training Bag in Gloversville NY and can be reached at mhauser@frontiernet.net  or call (518) 725-5565.  If you enjoyed this story and want to learn more about other boxing and sports history topics, look for Hauser’s “Hometown Sports Heroes” series of paperbacks on www.amazon.com and search; ‘Mike Hauser Hometown Sports Heroes.’ 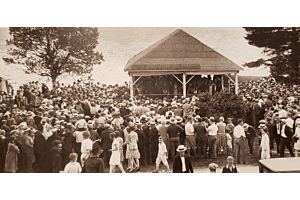 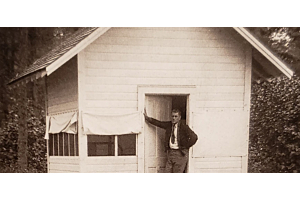