The store will not work correctly in the case when cookies are disabled.

What’s up Aqua Training Bag community? I’m Coach Dan Palacios and here we are on day three of our 5x5 Fitness Challenge.

Today’s workout is going to be all about balance. Making sure that we have the ability to shift our weight safely and effectively from one side of the body to the other. And a lot of that has to do with stability, particularly in your foot, ankle, knee, and hip.

Whenever we’re talking about balance, we have to focus on stabilizing the foot and ankle, rooting your feet into the floor. This could be helpful to take your shoes off here and just get a really good understanding of what the floor and surface you’re standing on feels like and allow your toes to spread out, anchor your heel into the floor, and engage your arch. That means, you’re almost going to grab the floor with your toes and feel yourself simply standing on one leg. Ideally, we want to stand for about 30 seconds easily on each side to know that we’re balanced and under control at all times. You feel like you’re wobbling all over the place, you can assist yourself by standing in front of your Aqua Training Bag and if you need to, simply touching the bag. Don’t grab it, but make sure that you maintain your balance. If you feel like you’re getting off balance, just touch the bag to give yourself a little bit of stability. And you may very well feel your foot start to burn. If you do, that means that we’re conditioning the foot, the ankle, the knee, the hip, to do the work that they need to do.

Now, if we’re doing what we need to do in order to stabilize the foot and ankle, we won’t see our foot rolling outward, which you can see starts to roll my knee outward. If we want to stabilize properly, align your knee down the middle of your bit toe and middle toe and keep your knee soft. A locked knee is going to force the ankle to work much harder. If we soften the knee, we’ll feel the glutes working a little bit more. We’ll certainly feel the foot and ankle working, and if we squeeze our glutes and brace our core slightly or stabilize our core with proper breathing patterns, we’ll get a lot more control over that foot and ankle. But still, touch that Aqua Training Bag in front of you just to give you a little bit of extra stability. Again, we’re aiming for about 30-seconds on each foot. Now, there’s a few basic movement patterns that we can execute from one leg, and we can do a few reps on each leg to make sure that we have a good understanding of what our balance is like from one side to the other. We can just stand on one leg, or we can lunge, which is a functional movement pattern that we see pretty often in fitness. And we can do a single leg RDL, or single leg T-stance. Now, the difference between those two movements, the lunge and the T-stance is that we’re either squatting or we’re hinging on one leg. The difference being that one is more knee dominant and one is more hip dominant. We want to be able to develop both of those and get strong on both of those, so that we have a much better understanding of how to balance from one side to the other.

Whether you’re fighting in a traditional stance, or fighting in a southpaw stance or switching back and forth, you want to have the ability to stabilize under control there. We’re going to do five reps on each leg, of each exercise, and then we’re going to put it all together by adding some punches into the mix. Check it out.

We’re going to start off with the reverse lunge on my right leg, five reps. Aiming my eyes at the bag, driving the knee up at the top. That’s one, two, three, four, and five. Keeping my foot rooted, keeping my heel down and focusing on using my hips and knees to drive me up into the air and stay upright while keeping control over my core. Let’s switch to my left foot for five reps, see if it’s just as balanced. One, rooting the foot, driving from the heel, feeling the glutes engaged, two, three, four, five. And notice I’m staying in my fighting stance to keep my elbows in tight, keep my defense up, so I can always throw my strikes when I need to.

What we don’t want to continue to create is an environment for poor movement patterns where we start wobbling all over the place. Simply touch that foot down, come back under control, and continue the exercise. Notice the lightness on the back foot as I plant, I’m maintaining most of the weight in my lead foot, trying to keep about 95% of my weight on my forward foot and very lightly touching my rear foot to the floor. As we go into the single leg hinge, we want to be sure that we’re not bending the knee, but hinging the hip backwards and feeling the hamstring stretch as we come down, feeling the glutes engage as we come up. And always getting that nice glute contraction at the top.

Round 2: Testing your balance

Let’s put some of it together. Let’s test that balance by staying up on one foot and throwing some jabs and crosses to the bag, light and easy, and see if we can maintain our balance for about 15-20 seconds. Stay up on the left foot, as if we’re on a traditional stance. And we’re throwing jab, cross, jab, cross, jab cross, one, two, three, four, five, six, seven, eight, nine, 10, 11, 12, 13, 14, 15. Switch legs. Same thing, now starting on the right hand, because now we’re in southpaw position. one, two, three, four, five, six, seven, eight, nine, 10, 11, 12, 13, 14, 15. Nice and easy. Testing that balance a little bit, adding some more dynamic movement on the upper body, while we remain stable on the lower body.

Round 3: Adding a power variation

Now, let’s put a little bit of a power variation into our single leg T-stance movement. So, we’re going to tip forward, and throw that punch. Balance as we come up, two, three, four, five, six, seven, eight, nine, 10. When we throw power punches, we tend to get ourselves a little bit over extended and that can throw us off balance, which puts us at a position to throw the next punch or dodge the next attack. It’s really important, that single leg hinge is that same motion we end up in, that same position we end up in, when we over extend a powerful punch. Let’s try it on the opposite side. Standing on the right, foot angling with the left. Five, six, seven, eight, nine, 10.

All right, so that does it for our 5x5 Fitness Challenge today here on day three, our balance challenge. Thanks a lot for watching and trying out these awesome balance drills. We’ll see you tomorrow for our coordination challenge. It’s going to get a lot tougher, we’re going to put a lot of these elements together now and really test not only your cardiovascular skill, your strength, your power, your endurance, your balance, and your coordination.

Check out tomorrow’s workout, the coordination challenge. We’ll see you there and see you next round! 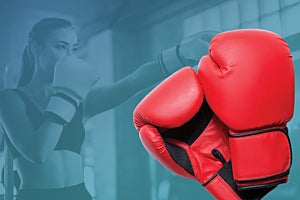 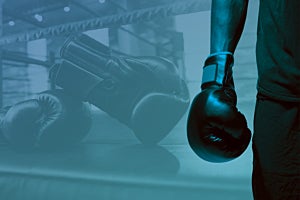 Benefits of Training with a Water-filled Boxing Bag 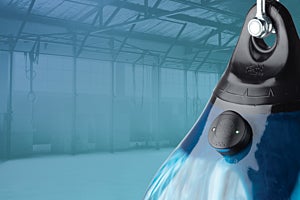